Grandeur of 40 years Illumination of Mihintale

vent of Arahat Mahinda Thera to Sri Lanka the Associated Newspapers of Ceylon Ltd has come forward to sponsor the Mihintale Aloka Pooja pinkama for the 40th year.

ANCL (Lake House) which inherits this 40 year service of performing the Mihintale Aloka Pooja is now in a mature stage after passing an important crossroad in its important journey. 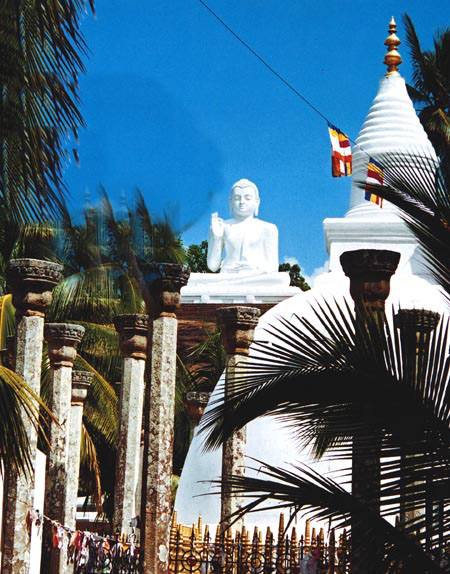 History reveals that the annual perahera and Mihintale Aloka Pooja had been held with appropriate pomp and pageantry down the ages from the time of Sinhala kings to pay homage to Arahat Mahinda Thera.

Mihintale which was in a state of neglect following foreign invasions was given a new lease of life with the renewal of the Aloka Pooja 40 years ago. The late Viharadhipati of the Mihintale Raja Maha Viharaya Ven. Walawahengunawewe Ratanapala Ratanajoti Nayaka Thera and the late D. R. Wijewardene should be remembered with gratitude as the pioneering people who made this possible.

Although the country intermittently went through certain dark periods politically thereafter, Lake House has worked indomitably to conduct the Aloka Pooja without interruption, and this should be highly appreciated by the Sri Lankan Buddhist public.

However it is regrettable to note that while one section is trying to work hard for the development and uplift of Mihintale in this manner another section is trying to obstruct their path and bring about the deterioration of Mihintale. It is in this context that the meritorious services rendered by ANCL (Lake House) in conducting the Mihintale Aloka Pooja becomes highly appreciable.

I also take this opportunity to convey my gratitude and thanks to the Ceylon Electricity Board for the sponsorship given to this Aloka Pooja Pinkama and other Government Departments, institutions and voluntary bodies helping to make the Poson celebrations at Mihintale a success.

Steps taken by ANCL (Lake House) to bring about a social and cultural reawakening in the Mihintale area in conjunction with the Mihintale Aloka Pooja speaks volumes for the grandeur and significance of this historic event.

‘No Bhikku against peace’ – Naga Viharadhipathy